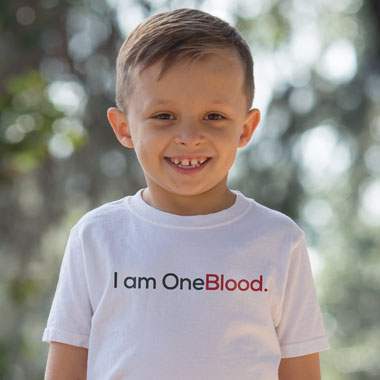 At eight hours old, Logan received his first blood transfusion. When he was born he was not breathing. The doctors were able to stabilize him, but Logan’s mom Amanda knew something was still not right. He had a low temperature and was pale, lethargic and not nursing. Logan’s hemoglobin levels were extremely low and when he stopped breathing again, he was rushed to another hospital.

Logan then spent the first month of his life in neonatal intensive care and received four blood transfusions, but doctors still didn’t know what was causing his condition. He then began care with a hematologist and continued to receive weekly transfusions.

When he was three, Logan was finally diagnosed with Pyruvate Kinease Deficiency (PKD) with an unknown mutation. PKD is a bone marrow enzyme deficiency that results in the production of ill formed or immature red blood cells. To make matters worse, Logan’s spleen saw his own red cells as a threat and was attacking them. Removing his spleen allowed for longer periods of time between transfusions but made him more susceptible to infections.

At this time, there is no cure for Logan and he will need blood transfusions for rest of life. He also takes daily medicine to help deplete the extra ferritin (iron) and fight off potential airborne illnesses. During the first seven years of his life, Logan has received approximately 110 blood transfusions. He now needs blood every six to eight weeks, just about the same time span a donor needs to become eligible again (56 days).

Despite all of this, Logan is a happy and playful child. He’s also very thankful. “Thank you for giving me blood and keeping me alive,” says Logan.