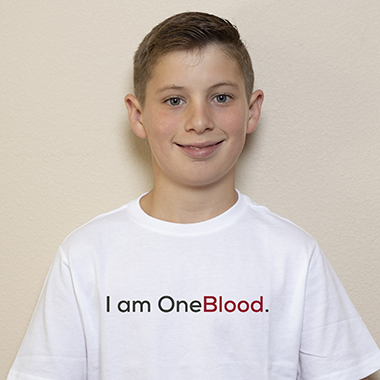 When Danny was just 2 years old, his mom noticed some alarming developmental delays in her son’s speech and movement.

“He wasn’t walking or talking,” said his mom, Danielle. “He had issues with pronunciation. Everything just kind of sounded mumbled. And then I started noticing that his head was getting bumpy and lumpy and shaped almost like a football.”

Desperate for answers about her son’s strange symptoms, Danielle turned to their doctor. A series of tests ultimately revealed a rare diagnosis.

“It came back that he had craniosynostosis,” Danielle said. “Basically, when the baby’s soft spot fuses together a little too soon, it puts pressure on the brain.”

Danny required surgery to relieve that pressure and allow his brain to grow properly.

Prior to surgery, Danny’s grandfather and his uncle stepped up to donate blood, hoping it would be a match for the toddler. On the day of surgery, the blood donated by his family members and another donor was ready and waiting when Danny needed three lifesaving blood transfusions.

“Because of the blood donated prior to his surgery, he is alive,” his mom said. “He’s able to live out his dreams. Blood donors saved my child.”

Danny’s story inspired his mother not only to become a blood donation advocate, but also to work for OneBlood. Today she coordinates blood drives, using her family’s story to encourage others to donate blood for patients in need, like her son.

“When I turn 16, I’m definitely going to donate blood because I see all those people doing it,” he said. “I would really like to donate because it helps save people’s lives.”