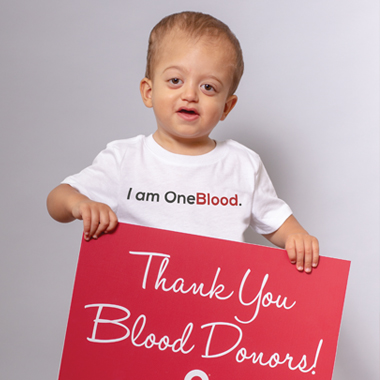 Blood donors help me through surgeries.

When Diego was born, his parents noticed that his left eye was bulging a bit and his head seemed oddly shaped near it. He was a well-behaved baby and he was feeding and sleeping normally, but his parents were still concerned about his head. A pediatric x-ray showed a normal skull but it had no soft spots. His mom and dad were determined to find out what was wrong.

After an MRI and several consultations with a neurosurgeon, Diego’s parents heard the crushing results. Diego had been born with a rare condition called Multi-suture Craniosynostosis. This condition prevents his skull from growing properly and creates pressure on the brain. Diego needed immediate surgery to relieve the pressure and provide more space for his brain to grow. At just four months old, Diego had his first of many surgeries.

Since then, Diego has had five cranial surgeries and undergone five full blood transfusions, including platelets. During his third surgery, he struggled with a MRSA infection that required doctors to open his skull yet again.

Diego has been strong and powerful through all his ordeals. He loves to share, smile, laugh, hug and especially to dance. His parents take him to a craniofacial clinic to monitor his growth and they have hope and faith that Diego will get through the multiple surgeries still to come.