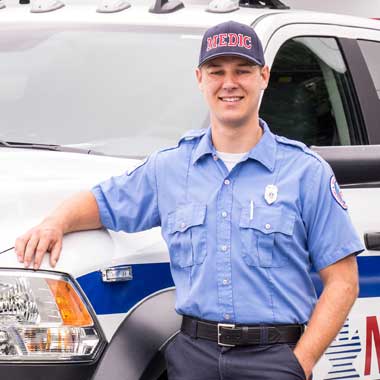 Every time Eric saves a life, it’s like the blood donors who saved his own life are also saving that person’s.

Eric’s co-workers from Medic responded to the wreck that nearly took his life. They rushed him to Atrium Health Main, where a team of trauma surgeons including Dr. Susan Evans awaited his arrival. In that critical first hour alone, Dr. Evans said Eric received 36 units of red blood cells, 35 units of plasma and two units of platelets as they worked to stabilize his battered body.

“It was touch-and-go there for definitely the first 24 hours, and even the weeks after that,” Eric said.

Eric has undergone more than 25 operations in the years since his wreck. Most of them required additional blood transfusions. But thanks to the quick actions of his Medic co-workers, the skilled team at Atrium Health, and generous local blood donors, he has been able to recover and get back to saving other people’s lives. Though now he has an even greater sense of purpose in his work.

“Not only did I need blood donations, but I see people who need blood donations on a daily basis,” he said. “I think that going through all of this just shows how much I can really persevere. It just gives you a new perspective on life and things in general. It’s enlightening almost.