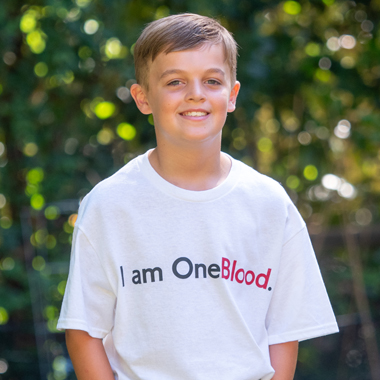 A cancer diagnosis is scary for any family. This aggressive form of leukemia required an equally aggressive treatment protocol, but Liam's care team remained confident it would work. After six rounds of chemotherapy, Liam finished his treatment and was in remission.

“Almost every round, he ended up getting blood or platelets,” said his father, Shawn. “He ended up with eight transfusions. That was critically important to keeping him out of the hospital and getting his numbers back up.”

As a lifelong blood donor, that’s something Shawn does not take for granted. To show his appreciation for the blood donors who helped support his son, Shawn donated blood next to Liam in the hospital as he received his final round of chemotherapy.

Now, with Liam’s battle behind them, the family continues to encourage people to donate blood to support other patients in similar situations. Shawn uses his social media presence and connections throughout the community to spread awareness and challenge others to step up and give. Hundreds have already answered the call, and his #LifesavingChallenge shows no signs of slowing down.