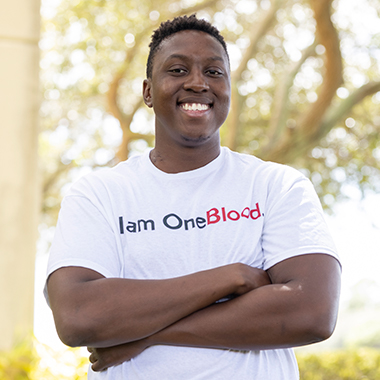 Jean has always dreamed of having superpowers. He would think about all the people he could help if he had the power of teleportation or superspeed.

Though he doesn’t have any of those comic book superpowers, Jean has found a way to make a difference.

When he was 17, Jean read about a OneBlood donor who had given 40 gallons.

“I thought that was so amazing that this man helped so many people,” Jean said. “It was that moment when I decided I wanted to donate 50 gallons.”

Jean established a routine of giving regularly. He started learning more about the people he could help with his donations. He even met someone with Lupus who had received platelet transfusions, which further inspired him to stick with his mission.

In 2021, Jean reached the impressive 10-gallon milestone, and he’s not stopping there.

“I’m hoping my story, even though I am an ordinary guy, inspires others to help their community out by donating,” Jean said. “Whether it’s blood or your time, I honestly believe to make the world a better place, you must start the process and others will follow.”

Jean doesn’t need a cape or a shield to be a superhero. His superpower is running through his veins: saving lives through blood donation.