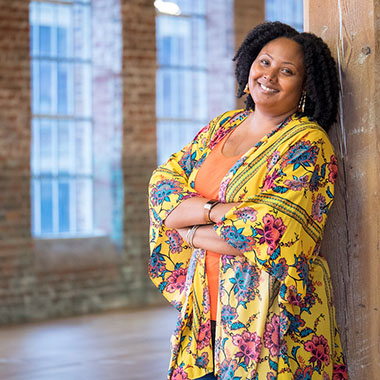 Blood donors have helped her do great things

Every four to six weeks for the last 10 years, Alanna has met with her doctors to have her blood tested. If her hemoglobin counts are too low, she goes to Cone Health MedCenter High Point or is admitted to Wesley Long Hospital to receive a blood transfusion.

A change in her medication a decade ago left doctors looking for other ways to treat the symptoms of her sickle cell disease.

Sometimes Alanna’s counts are fine and she can avoid a transfusion. Other times, a pain crisis, a leg ulcer, or any number of other complications will arise and require her to receive blood. Earlier this year, the bone marrow in her leg stopped producing red blood cells.

“They needed to give me a jolt,” she said. “I got eight bags of blood – four transfusions, two bags each. I was better within a week.”

“I will need up to 13 for a full body blood exchange,” Alanna said. “But that doesn’t happen often. Maybe two or three times in the last 15 years.”

Despite needing dozens of transfusions since the age of 9 – Alanna puts the number at well over 100 – she considers herself fortunate.

“Some people with sickle cell can’t hold a job,” she said. “But I have an associate degree, a bachelor’s, and a master’s. I had the third highest GPA in school. During my undergrad, I was in five honor societies. A lot of great things came from people donating blood.”

Alanna is thankful for those who have stepped up to donate and help her live her life. That’s something that motivates her in her involvement with Piedmont Health Services and Sickle Cell Agency.

“Even when I don’t need support, I can work with them to support others,” she said.