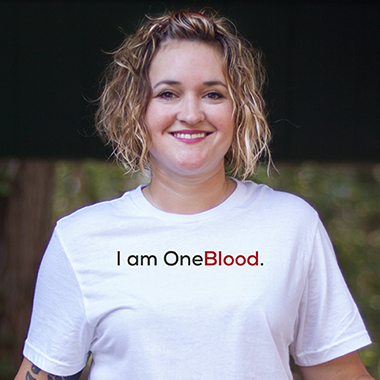 “They wheeled me to the ambulance and as soon as they loaded me, I died,” she said.

For 45 minutes, the medical team worked to revive Rebecca as her wife, Katherine, waited for news.

“They told me my wife was dead,” Katherine said. “That they were trying to resuscitate her and they were able to get a rhythm back, and then it would go away.”

“They were able to revive me enough that my heart would beat on its own again, and then I would die again,” Rebecca said. “I died three times. When I woke up, I didn’t have my leg. But I woke up.”

A lack of circulation while Rebecca’s heart stopped beating caused severe tissue damage and left doctors no choice but to amputate her left leg. When she awoke from the surgery, Rebecca saw a familiar sight.

As an 8-gallon blood donor and OneBlood phlebotomist, Rebecca understood the lifesaving importance of the bag of red liquid hanging beside her hospital bed.

“I recognized that bag, and was able to watch it go through my line and then into my wrist,” she said. “In total, I received four units of red cells.”

Rebecca and her wife are grateful for the blood donors who helped keep her alive.

“There's nothing I can say but thank you,” Katherine said. “You allowed me to keep her.”

Throughout her recovery, Rebecca remained resilient. Just four months after losing her leg, she was back at work, collecting lifesaving blood products to help others in need.

“It feels amazing,” she said. “I’m thrilled to be back at work. And any way that I can advocate for being a blood donor, I will.”