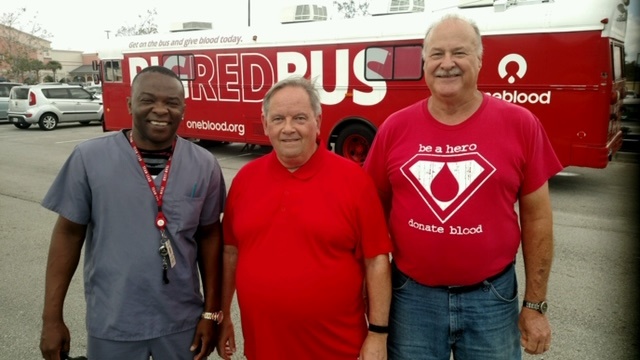 (April 8, 2019 – Orlando, Florida) A trip to the gym put a OneBlood team member in the right place at the right time.

Sam Palacio, a Donor Services Team Leader and Phlebotomist at OneBlood, was finishing his workout at Planet Fitness in Palm Bay, Florida when a man next to him suffered a massive heart attack.  Sam sprang into action and immediately began to administer CPR.  He continued with chest compressions for upwards of 15 minutes and assisted paramedics when they arrived.

The man he saved, Mike DuBois, was rushed to the hospital where he underwent emergency surgery where it was discovered he had 100% blockage of an artery to his heart.  Doctors were able to insert a stent and clear the blockage.

Doctors told Mike that if it was not for the quick thinking of the person who performed CPR, he would not have survived.

Mike was on a mission to find the mystery person at the gym who was being credited with saving his life.  He wasn’t having any luck in finding out who the person was, until one day, the mystery was solved onboard OneBlood’s Big Red Bus.

As luck would have it, Mike’s best friend, a man named Richard Hood, knows Sam! That’s because Richard is a long-time blood donor and donates regularly on the bloodmobile where Sam works.

Stunned at the ironic turn of events, Richard called Mike to tell him he solved the mystery and knew who the person was that saved him at the gym.

When OneBlood learned of the story, arrangements were made to bring Sam and Mike together.  Cameras were rolling when Mike was able to meet Sam and thank him for saving his life.

As part of his training at OneBlood, Sam was certified in CPR.  The CPR training enabled Sam to know exactly what to do and as a result, Mike is alive today.