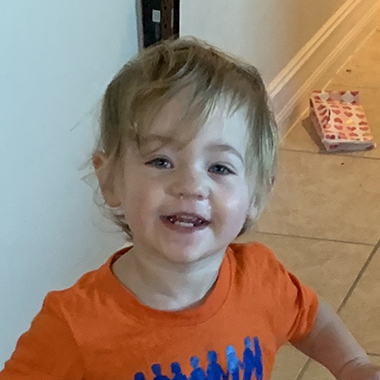 While in the NICU, Eleanor received seven blood transfusions as doctors worked keep her alive.

“Since she was so incredibly tiny, her body had trouble making its own blood, and the doctors needed to run many blood tests to determine appropriate treatment,” said her mom, Christine. “Some of her first blood transfusions were mere milliliters of blood.”

Those seven tiny blood transfusions helped save the infant’s life.

“Thanks to blood donors, neonatal care, and her strong will, she’s now a happy, healthy 2-year-old,” Christine said. “She’s so full of life!”

Christine and her husband were blood donors before Eleanor’s birth, but their experience inspired them to give more regularly. They both feel that part of their family’s journey is to raise awareness and help others facing similar situations.

“We were given such a grim outlook on Eleanor’s survival and limitations if she were to live, but she’s defied it all, and was definitely meant to be here,” Christine said.