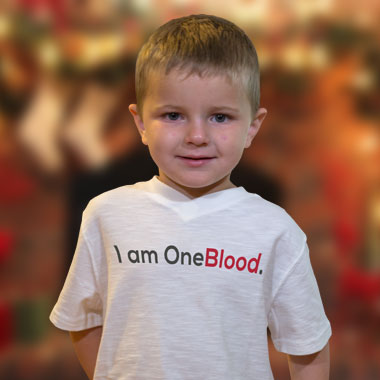 Within hours, the Irwin’s were in the hospital for further testing and lab work. Grayson’s white blood cell (WBC) count was 378,000. The average for a child his age would have been around 10,000. Doctors immediately started giving Grayson blood and platelet transfusions. In just 12 hours, the lives of the Irwin family had been turned completely upside down.

Grayson’s treatment plan involved two long years of chemotherapy with blood and platelet transfusions to keep his blood cell counts where they needed to be. The first six months were the most aggressive part of the treatment plan and would gradually taper off, as long as Grayson responded well. Doctors also determined that they would administer IVIG transfusions on a monthly basis to keep Grayson’s immunity up. IVIG transfusions are only possible to form by using hundreds of units of plasma from generous blood donors. It was a long road to recovery, but the Irwin’s held strong with the motto “tough as nails.” They maintained this inspiring attitude during Grayson’s entire treatment, through the bad or good.

Today, Grayson is a flourishing four year old who recently celebrated his one year anniversary of being cancer free. He is thriving in his new VPK class and continues to be in remission. The Irwin family and friends understand the importance of blood, platelet and plasma donation as each of these products helped save Grayson’s life. “Without the blood donations of people that didn't even know my son, I honestly could not say that my son would be with us today. We are so grateful for all the donors that played such a vital role in Grayson's victory against pediatric cancer!”