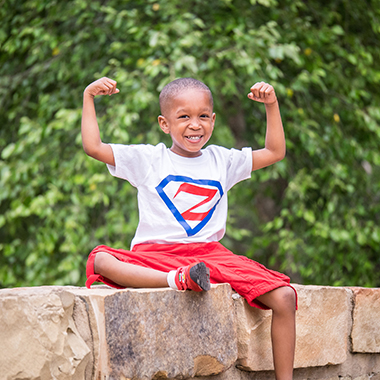 Sickle cell disease has always been part of Aaliyah’s life, though she didn’t always know it.

After her son, Za’Quis, was born in 2011 and diagnosed with sickle cell, Aaliyah found out that her late father had also battled the disease. An Army veteran, he had never let his children worry about the medical hardships he faced.

Za’Quis seems to take after his grandfather in that respect. The 5-year-old doesn’t let on that he’s fighting a painful disease that requires daily medication and frequent doctor visits. He loves to play on the monkey bars and swings (as long as someone else is pushing). He’s also already a pro at having his finger pricked and his blood drawn, acting like a big boy throughout the entire process.

But in February 2015, Za’Quis couldn’t hide his pain. The family was out for dessert, but Za’Quis wasn’t eating his fro-yo – and he loves fro-yo.

“I’ll never forget the look on his face,” Aaliyah said. “You could just tell he was not OK.”

Za’Quis was up all night, sick and screaming in agony. Aaliyah couldn’t even pick up her then-3-year-old without causing him excruciating pain. The family ended up at Atrium Health’s Levine Children’s and Za’Quis received his first blood transfusion to treat the pain crisis and relieve his immense pain.

Sickle cell patients often require multiple blood transfusions throughout their lives as part of their treatment. Many of those patients require blood from Sickle Cell Heroes, donors whose blood is a better genetic match to the patient and less likely to cause a reaction.

Since Za’Quis was born, the family has tried to stay active with local sickle cell groups and activities and connect with other local patients. Every fall, Za’Quis’ older sister, 11-year-old Serenity, starts asking when it will be time to attend the annual Sickle Cell Walk/Run again.

“She has made it her mission to go to every one,” Aaliyah said.

Serenity and Za’Quis have a special bond. Serenity understands that her brother is dealing with something and that he needs medicine, and she wants to help.

Aaliyah said, “Serenity told me, ‘When I get older, I need to get my blood checked in case Za’Quis ever needs it’.”

Though it will still be a few years before Serenity can donate blood, the family continues to give back to their community. They are always ready to lend a helping hand to those in need, as well as raise awareness for a disease that has become an enduring aspect of each of their lives.