Having a blood transfusion while pregnant can be a frightening scenario. There are several non-emergent and emergent factors that may cause a woman to need a transfusion during pregnancy, but the important thing is that receiving blood could help save her life.

What are the reasons to have a blood transfusion while pregnant?

Non-emergency reasons to have a blood transfusion

Anemia due to iron deficiency is one of the most common reasons for a blood transfusion during pregnancy and is considered a non-emergency situation. For anemic women, even a small amount of bleeding during delivery could cause a complication.

A blood transfusion prior to delivery can help avoid those.

Bleeding during delivery can cause a woman to feel unwell, weak, dizzy or short of breath. As long as the bleeding has stopped, this is also a non-emergency situation.

Women are likely to be offered a blood transfusion shortly after delivery in the recovery/post-natal ward if they are experiencing these symptoms.

Women with Sickle Cell Disease or Thalassemia have trouble producing healthy hemoglobin and are at an increased risk of anemia when they become pregnant.

A hemorrhage is severe bleeding that can occur internally or externally and can lead to severe anemia. A woman could become seriously ill or even die without a blood transfusion to replace the blood she’s lost.

Hemorrhaging during pregnancy or after delivery is an emergency and requires medical attention.

A miscarriage or an ectopic pregnancy (where the fertilized egg attaches itself in a place other than inside the uterus) can cause hemorrhaging.

An antepartum hemorrhage is a serious complication of pregnancy that occurs after 20-24 weeks gestation (third trimester). Common causes are labor, miscarriage, placenta previa or placenta abruption.

It is associated with significant maternal and fetal mortality and surgery is usually emergent. Blood transfusions can help replace the blood lost due to the hemorrhage and during the surgery for treatment.

Significant bleeding during birth, or immediately after, is called a postpartum hemorrhage and is considered an emergency that may require a blood transfusion and surgery.

Postpartum hemorrhaging can be caused by the “four Ts”: 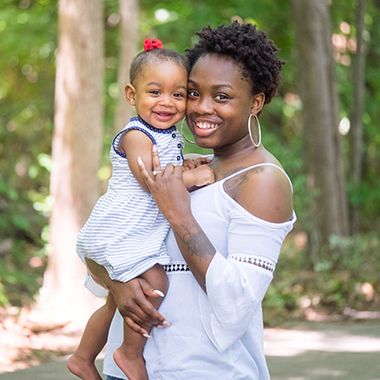 Khayla has a hard time counting just how many blood transfusions she has had, but she knows it’s more than 25.

Dealing with sickle cell disease has always been difficult for her and her younger brother, Kenneth.

When Khayla was pregnant with Ava, her blood count got dangerously low and she was admitted to the hospital.

“It was to the point where I just couldn’t give her what she needed from me,” Khayla said. “Having a blood transfusion really helped because I was able to get better and still supply her with nutrients and give her life. My husband and I are grateful because she’s here. And without blood donors, she wouldn’t be.”

The blood you donate today could help save the lives of a mom and her baby. Schedule an appointment to donate blood.